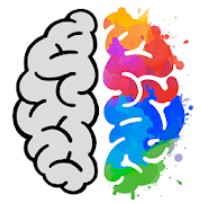 Watch the counters closely. Looks like they’re trying to mess you up!
The red counter skips a number. Move to the green counter when the red shows 11
Ios :
Which of these playing dies is the odd one out?

Look around the table, maybe there is something useful on it?
Bring each die up to the mirror to see its opposite side.

Eww! One of the ingredients in this pot is rotten!
Before you add the vegetables, flip your phone upside down and the spoiled ingredient will fall out of the pot.
Ios :
Which symbol can be put between 4 and 5 to get a number greater than 4, yet smaller than 5?

The piglet is hiding behind its mom! How can we get her to move?
Tickle the big pig’s belly to make her move, then feed the piglet.
Ios :
How many berries are in the picture?

Look for something beyond the edges of the screen
You literally need to set the tree on fire! Zoom out to find the tools for that.
Ios :
Find the correct answer

The answer is definitely 20, but is there another way to enter that number based on the instructions?
Drag the piglet to the answer field (the piglet is equal to 20).

Looks like this isn’t the whole harvest! Try shaking the tree
Move the tree to find the fourth apple.
Ios :
Get the crystal!

The button keeps trying to escape! Hold it down so it can’t run off
Hold the button down with one finger and use another finger to push it.
Ios :
How many triangles are in the picture? (Hint: there are less than 19)

Something isn’t right with this pentagram, try taking it apart!
You need to disassemble the pentacle by dragging out one of the triangles

117 level – Brain Blow Answers:
Android :
Is the glass half full or half empty?

Looks like both answers are kind of right!
Try tapping both buttons at once
Ios :
Turn on the minimal number of faucets to make water run

I wonder what this pot is doing here? Check it out!
Maybe something will fall out if you turn it over?
Ios :
Take the toy out of the bottle

Check out the third 5… It looks a little strange
There is a dash hidden in the third 5. Use it to cross the equation sign to make 5+5+5 NOT EQUALS 555.
Ios :
Give the kitten a little scratch

Tip: kittens prefer a human touch over a comb.
Scratch the kitten behind its ear with your finger.

Note the number 3. Compare the positions of the other numbers to it
It’s cube №3.
Ios :
Get to the end of the level

What’s up top? The ceiling or the floor?
To get to the end of the level turn your phone upside down